Despite—or perhaps because of—that, I pulled myself together. After passing some courses that especially triggered my procrastination, I did much better, and eventually emerged with a master’s degree in software engineering and a PhD in computer science.

But that does not mean I had completely overcome procrastination, especially not during the PhD study. It was not until leaving academia for the IT business that I experienced what it is like to get control of my procrastination. (It’s amazing, by the way.)

In a previous post I introduced learning Vim the harder way. To summarize:

Now, there’s nothing wrong with using the arrow keys per se, but it very often leads to staying in insert mode most of the time and thus missing out on all the stuff you can do from normal mode. As someone wrote about vi/Vim:

your keyboard becomes a huge specialized text-editing gamepad with almost a hundred buttons.

There’s nothing wrong with using hjkl either, in fact they’re very good because they force you to use normal mode as your, well, normal mode. However, normal mode only really provides an advantage if you harness its power and go beyond the basics. For motions, that involves reducing your use of hjkl. In this part we see how to do that for inserting and deleting text. 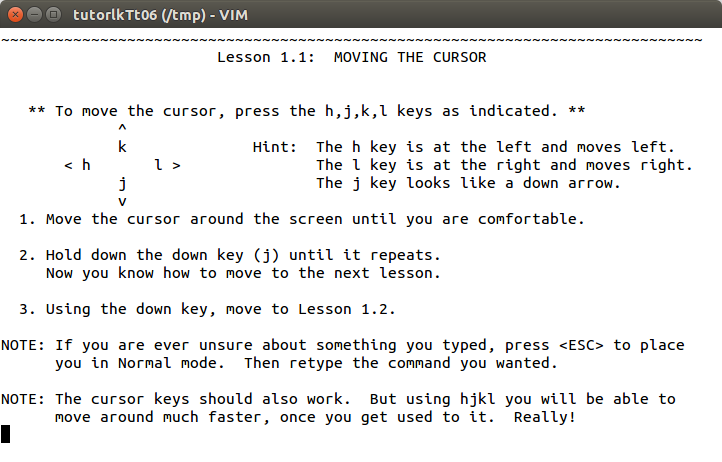 Last fall, I had been at Aalborg University for nine years: One year in electronic engineering, five years studying software engineering, and three years doing a PhD in computer science. The first six years as a bachelor and master’s student were relatively straightforward and satisfying. The last three years formed my introduction to the academic world.

I left the university before having finished my PhD, to work at a private company as an IT consultant. I managed to finish my thesis concurrently with my new job, and I have now defended it successfully. But the last half year has also helped me see more clearly my motivation for switching jobs. It can be summed up like this: Now, I go home from work most days feeling a sense of accomplishment. Before, I came home from work many days with the feeling of having failed.

As a young Windows user, I learned that if you write .LOG as the first line of a text file, then each time you open it in Notepad, it appends the current time and date to the file. That was pretty cool. And useful for logging things, as .LOG implies. Later I became a Vim user and started enjoying all the customization I can do to my editor. Or perhaps I became a Vim user because I enjoy customizing! Either way, I like my date and time shortcuts in Vim. For example:

This means: Map the key sequence ,t (comma followed by ’t’) to the result of the expression strftime("%H:%M") in the insert and command line modes. So if I write “The package arrived ,t”, what I will see is “The package arrived 13:43”, or whatever the time was. I use capital T for further precision (seconds), ,d to insert the date (of course in ISO 8601 format), and ,l to insert date and time together (‘l’ for log, as with .LOG):

At work, I often connect to Windows servers over Remote Desktop Protocol (RDP). A few times, I have been met with a blank white screen, typically after changing screen resolution in the Remote Desktop Connection options.

The first time this happened I spent a lot of time googling to no avail, so now I will put the solution I found by chance here in case it might help someone else. And note that encountering a blank black screen is a different and more frequent problem, the solutions to which didn’t help me with my white screen in the time that I spent on it.

An Alt-F4 was all it took to get rid of the white screen. However, if that does not work, you can also try a Ctrl-Alt-End (the remote desktop equivalent of Ctrl-Alt-Del), and see if you can work anything out from there. Good luck!

The calendar helped me floss (more or less) daily.

If you are already starting to forget about your New Year’s resolutions, here’s a tip to keep going: Visualize your progress: Put X’s on a calendar on every day you do what whatever you want to do more of. Stick the calendar on the wall or wherever it would remind you of your goal.

Some years back, each time I visited my dentist, she recommended that I floss. And I would decide that this time I would start doing it. But some days later, I started slipping and forgetting about it. It wasn’t until I put a year-at-a-glance calendar on the bathroom cabinet door that the habit stuck.

Putting a mark on a calendar is not rocket science, but the satisfaction of marking a completed task and of seeing your progress is a mental reward that can make a big difference. If you want to try, I made a one page 2016 calendar you can print (LibreOffice/odt, Word/docx). (It was easily made with the open source ncal utility, invoked as ncal -bh 2016.)