I use a weird computer keyboard: The Kinesis Advantage. It’s a concave, columnar, split, tented, mechanical keyboard with thumb keys. It’s very comfortable and much better than anything Logitech or Microsoft have ever labeled ergonomic.

Columnar means that the keys are laid out in straight columns, so you don’t have to bend your fingers sideways as you curl and extend them — unlike on a standard, staggered keyboard, where especially the left hand fingers need to move unnaturally. The split also helps avoiding sideways bends for the wrists. For more details, see the illustration of the Truly Ergonomic keyboard (which I haven’t tried (yet)).

Tented means that the thumb side of each hand sits higher than the pinky side. This gives the wrists a more natural rotation. The Advantage only tilts 20 degrees — other keyboards such as the Kinesis Freestyle and the SafeType can tent (up to) 90 degrees (while looking even less conventional than the Advantage).

The thumb key clusters make more keys reachable without moving the hand away from its home position, and it offloads Backspace and Enter from the overworked right pinky and onto the stronger thumbs.

The mechanical keyswitches (Cherry MX brown or red) register the keypress when the key is halfway depressed (2 out of 4 millimeters). This is opposed to standard rubber dome keyboards that require you to bottom out — fully depress the key until the finger is jolted to a stop.

The best feature of the Advantage is the concave keywells: The scooped-out parts of the keyboard where the alphanumeric keys reside. They serve several purposes:

I got my first Kinesis Advantage in 2011. As I recall, it only took a few days to adapt to this weird keyboard. The best part is that I can still switch effortlessly between the Advantage and standard, flat, staggered keyboards. Not that I particularly enjoy it, but I can do it, which is very practical for traveling. The Advantage is actually narrower than a standard 104/105-key keyboard, but it’s bigger in the two other dimensions and therefore not easy to transport.

However, the physical shape of my keyboard is not the only weird thing about my typing. The logical layout I use — Colemak — is weird too. 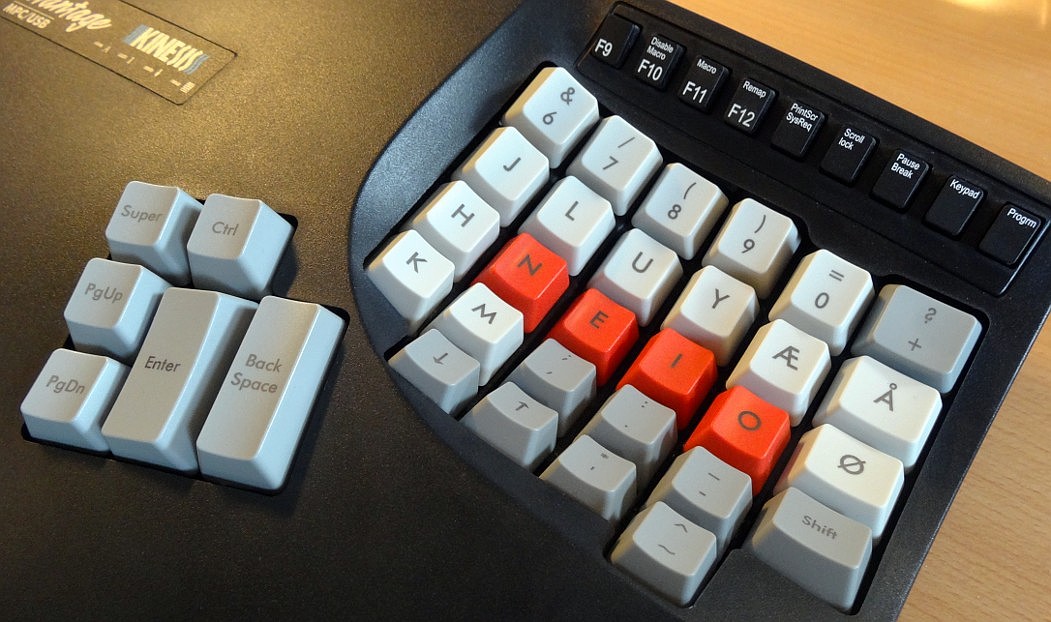 Some people retain their QWERTY touch typing skills while learning an alternative layout by associating logical layout with physical keyboard, e.g., typing Colemak on the Advantage and QWERTY on standard keyboards. And I did actually get the Advantage the same year I switched to Colemak, but I much prefer typing Colemak on my laptop while traveling over maintaining my QWERTY skills.

It’s not really necessary have Colemak legends on the keys, but I did get a set of custom keycaps made by WASD keyboards for one of my two Advantages — complete with my Danish variation of Colemak — as shown in the images above and below. It’s mostly for show, because the legends are not necessary for touch typing, and the Advantage is not so good anyway for one-handed use where the legends might be relevant.

In fact, hunt-and-peck typing is for some reason easier for me with QWERTY legends, even while I type Colemak. My eyes are more used to the common QWERTY layout, I guess. I just know that pressing the QWERTY ’T’ key produces a ‘G’ in Colemak. If I look down and the key shows a ‘G’, my eyes get confused, even though my fingers knows exactly where to press to get the ‘G’ while touch typing. 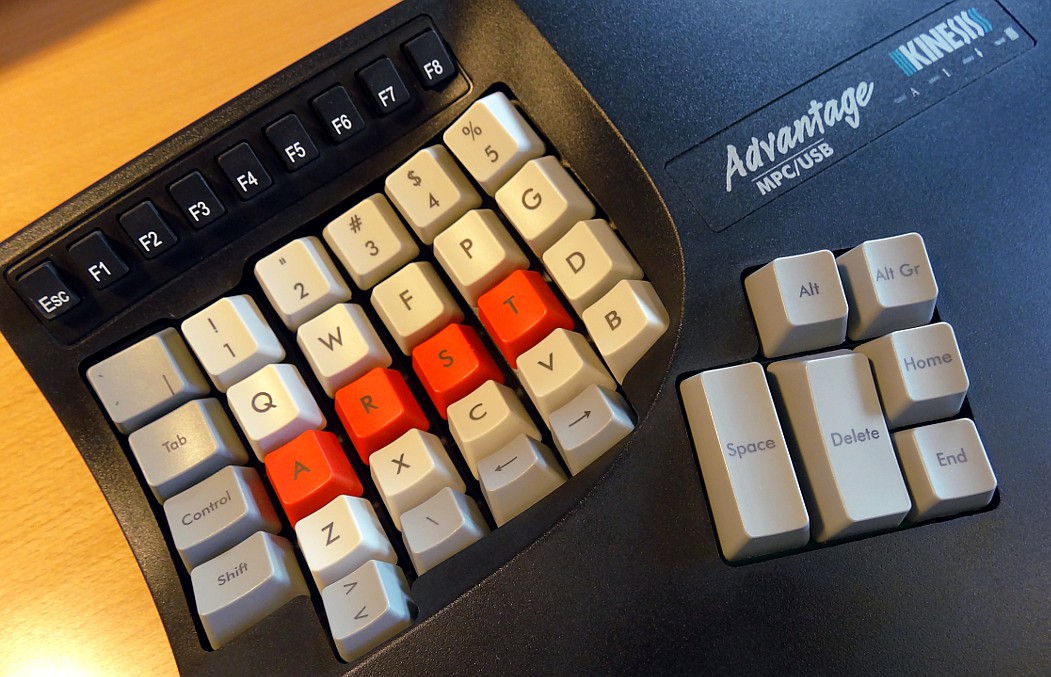 The Advantage is not great for everything. Split keyboards are not good for the occasional one-handed use (e.g., while holding a drink, phone, piece of paper).

The Advantage is not the best for gaming either. The arrow keys are spread on both sides of the split which is fine for two-handed office and programming use, but not ideal for gaming. The key positions are matched to finger lengths, so the WASD keys will not work well with the normal WASD-fingers. ESDF should be perfect, though.

For a long time, the typical complaint of the Advantage was the low quality of the rubber F-keys. In 2016, the Advantage2 was launched, with Cherry ML switches instead of rubber dome F-keys, and more programming options. This is the product I link to in the top of the post because the product page for the old version seems to be gone. I haven’t tried it, but I can only imagine it’s an improvement.

Another problem partially solved by time is the built-in combined USB hub and PS/2-to-USB converter. It — and the whole keyboard with it — didn’t work with Windows 7. Kinesis did sell a cable conversion kit to work around this, but I went DIY and installed a PS/2-to-USB adapter myself, bypassing the problematic USB hub, on my “work” board.

My “home” board always worked fine with Linux (and Windows 10), but it’s also not recognized by the BIOS of my desktop computer’s motherboard. A smaller problem but I’m considering giving this board a USB hubectomy as well. The Advantage2 has supposedly also solved this problem.

There are a few problems with the Advantage, but they are minor compared to the Advantage (heh) of using an extremely comfortable keyboard for my 10+ daily hours of computer usage.

My remaining complaints were solved with easy firmware remapping, which is in fact just a testament to the Advantage’s flexibility: