Sound in a Box

One might ask why you need a box like this when you can generate the same sounds in your computer. But the new Roland releases are in fact just software in boxes — digital emulations of the original electronics. The point is that a box with the right buttons, knobs, and sliders makes the experience of sound exploration tactile and immediate.

Plus, in this age of multi purpose devices, there is just something fascinating about a device that does just one thing, does it well, and doesn’t let you connect to Facebook.

Compared with the Jupiter-8, the JP-08 is tiny. It has the footprint of an A4 sheet of paper (somewhere between letter and legal for you North Americans), and that’s with the optional mini-keyboard attached. Since it can also be powered from batteries, that means it’s portable. You can bring it on trips, to the park, or just the sofa. (Or bring it to bed, according to JunkieXL!)

As part of the portability, the unit even has a built-in speaker so you can play it without attaching a sound system or headphones. As practical as this is, the speaker has no bass and a tendency to make the chassis rattle and resonate. So I recommend skipping it altogether because that will sound much better and make you appreciate the unit more.

Too Small a Box

The portable coolness however comes at a cost. To fit all of the controls of the Jupiter-8 into such a small areal, they have been arranged in two rows. Thus the sliders only have a throw of 1 cm, which means they require delicate hand movements. This detracts from the overall hand-on experience, even though they are usable with patience. The worst part is that it’s very hard to sweep the filter or pulse width smoothly.

However diminutive they are, controls dedicated to exactly one sound parameter provide much of the immediacy of the overall experience. Unfortunately, the auxiliary controls are tucked away under button combinations — a few labelled, most not.

Better With a MIDI Controller

Many of the above problems can be solved by a separate MIDI controller:

Using a separate controller defeats the portability, but seen from the bright side it just means you can switch between portability and better control.

Also lost in the miniaturization were the little orange signal routing hints scattered around the original Jupiter-8 panel: 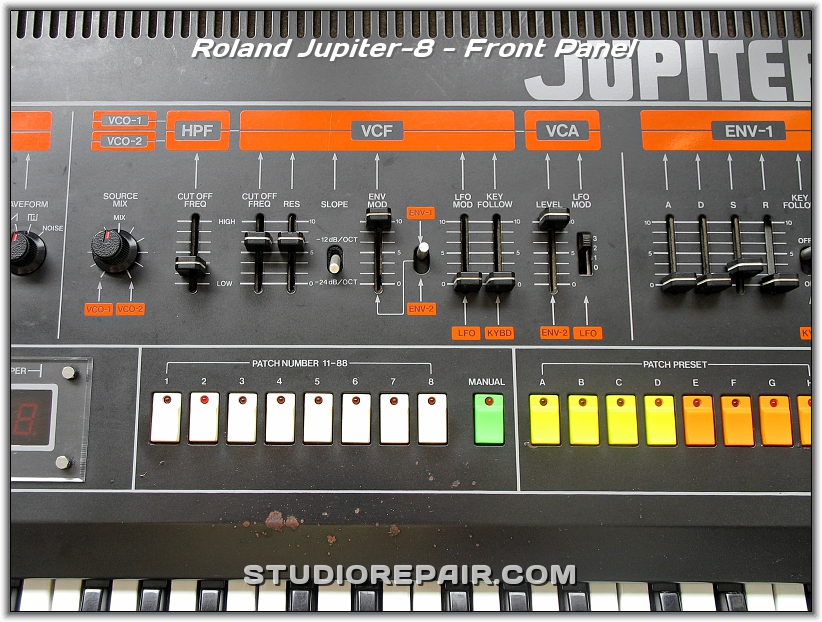 I didn’t know of these when I got my JP-08, so it was somewhat confusing. The source mix knob was the first one I figured out: It mixes between the two only sound sources — the two oscillators.

Then there’s also routing between the two oscillators. VCO-1 has a ‘cross mod’ slider and VCO-2 has a ‘sync’ switch. What’s missing from the panel is the direction of the routing (and even that routing is going on, if you don’t know what ‘cross mod’ or ‘sync’ means).

Cross modulation allows the pitch of VCO-1 to be affected by the pitch of VCO-2, creating crazy bends or new timbres, depending on the frequency of VCO-2. Sync allows VCO-2 to return to the start of its cycle at the frequency of VCO-1, creating new timbres out of existing wave forms. After figuring out the routing, the JP-08 made a lot more sense. 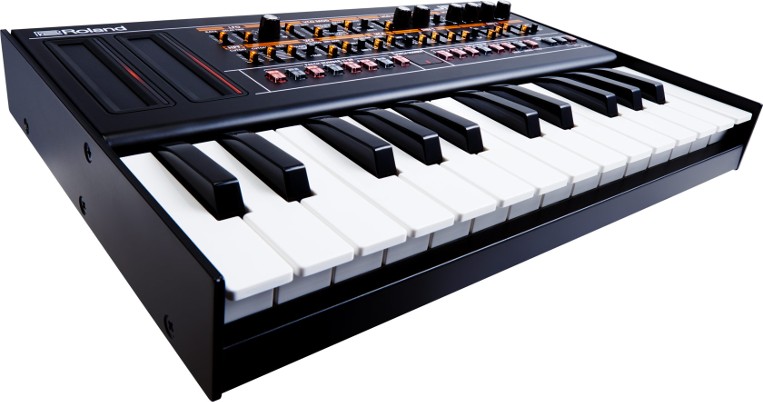 The JP-08 itself is a sturdy metal panel on top of a plastic box. In its unmounted form it appears somewhat naked. Adding the optional K-25m keyboard module really helps completing the look of the device.

Also, the metal surfaces have a satisfying ability to not pick up fingerprints.

The ‘8’ in Jupiter-8 meant eight voices. The JP-08 only has four voices, meaning only 4 notes can sound at the same time. This has irritated a lot of people, including me. I mean, it’s not that I play 9th chords all the time, but Roland, did you really need to go for the minimum effort here, to try to sell more boxes?

Roland happily claims that you can connect more units to increase the polyphony by four each time. This is better than nothing, but it’s also only partially true. Because while you can play 4n notes simultaneously, there’s still voice stealing when you play notes sequentially (which is called… music… you might have heard of it, Roland). That means that if you play a sound that fades out gradually after lifting your finger from the key, that tail will be cut off by the next note that starts, if no unused voice is available within the first 4, not 4n, voices. Here’s a demonstration.

Since the JP-08 is a (really good) digital simulation of the original analog electronics, giving it eight voices shouldn’t be that hard. Maybe you’d need a better processor, but compared with the costs of development and production, that cost should be minimal. And you’d have happier users. Then perhaps, instead of buying another JP-08 and feeling like an idiot (which I chose not to), I might have bought one of the other Boutiques.

The four voices bring another annoyance, which we need to take a step back to understand. The Juno-106, JU-06, Jupiter-8, and JP-08 all have 16 buttons used for patch selection. The JU-06 has eight bank buttons and eight patch buttons, leading to a total of 64 patches. (The Juno-106, which I own, additionally has a group selector multiplying everything by two for 128 patches in total.) On the Juno-106 and JU-06, a single button press can switch the bank number (the first digit) and the patch number (the last digit) independently (as well as the group, on the Juno-106), which is very nice. (The Juno-106 also has a patch increment pedal input, but I digress).

A patch preset cuts the polyphony in half, since each note you play uses two voices. Thus, with the JP-08 having only four voices and no split option, patch presets are much less useful. You can’t even play real chords! You can still play leads and power chords with your layered sound. However, this could be accomplished with the ‘dual’ and ‘upper/lower’ buttons without reserving eight buttons for patch presets. Instead, it could have used the faster bank+patch system like the Juno. (Or better yet, it could just have had eight voices.)

There is one final snafu with the 16 buttons and the way they relate to the delay effect parameters (level, time, and feedback). Because changing the parameters is difficult while playing, you are not likely to notice it, but changing the delay time also flushes the delay buffer. However, if you control the delay parameters with a knob on a MIDI controller, this becomes embarrassingly obvious.

The JP-08 is fun and sounds really good. But there are so many things that feel like they could have been much better with small changes.

Eight voices, obviously. Then the sliders could have been much better with a small increase in the height of the box. A small increase in width could have allowed space for direct control of many more parameters. And an arpeggiator! Not to mention full width keys or more mini keys. A normal pitch bend and mod stick would also be great, but this might make the unit deeper.

Dimensions multiply, and the unit would quickly become much bigger and less cute. But it would also be much better and less toy-like. The tiny Boutique format just seems to go better with machines with fewer controls the Juno-106 or the VP-330.