I’ve driven the Hyundai Ioniq Electric for two years now, and it’s time for some more stats. While the car model is not for sale anymore, it will exist on the used car market for many years to come, and I’m going to continue documenting my experiences with it here. Despite being discontinued, the car remains one of the most energy efficient mass market vehicles on the roads today.

The Ioniq Electric reports energy use per distance (e.g., kWh/100km) or distance traveled per energy amount (e.g., km/kWh), depending on your preference. The car has three counters: A trip with automatic reset (after four hours of parking), a trip with manual reset, and a long-term counter with manual reset. I reset the long-term counter a couple of times, so I do not have the car’s own efficiency value for the past two years. But I do have a log of all the times I charged the car, so I know how much energy I put into the battery and how far I drove. This gives me an overall vehicle efficiency of 6.46 km/kWh.

This value includes all the energy spent under all of the real-world conditions of the shifting Danish weather, HVAC use (heating, ventilation, and air conditioning), tires (AllSeasonContact), driving styles and speeds, etc. The figure is the vehicle efficiency and so does not include charging losses. It does however include the energy used by the car while it is parked, which I estimate to be around 50 kWh/year. (I didn’t get the Bluelink option to make the Ioniq internet-connected. An app-enabled online car could use (much) more energy while parked.) By correcting for the assumed 50 kWh/year drain, I get a driving-only efficiency of 6.83 km/kWh (still including HVAC and everything else while driving). In the table below, I compare my performance with the WLTP results and the Electric Vehicle Database’s Real Range (also driving only) numbers:

The table also shows the range which is calculated as the efficiency multiplied by the usable battery size which is 38.3 kWh. (If the range seems too low for you, Hyundai are on their way to fix it with the upcoming Ioniq 6 sedan which is expected to keep the efficiency of the Ioniq Electric while almost doubling its range.) I do not report my car’s own range estimation as it is not representative of the long-term. It depends only on recent driving conditions, as well as HVAC considered either as turned off or with its instantaneous power draw, neither of which are long-term representative.

The results give me a lot of confidence in EVDB to not overestimate efficiency and range, like the WLTP often does. My results being better than EVDB might be down to the fact that I drive slightly less on motorways/highways than an average driver, or that the Danish weather is slightly warmer than in the EVDB model. Speaking of the weather, let’s look at how efficiency changes with the seasons.

The following diagram shows the driving efficiency average for each two-month period (Nov-Dec, Jan-Feb, etc.) for the past two years, ranging from 4.7 to 8.4 km/kWh. 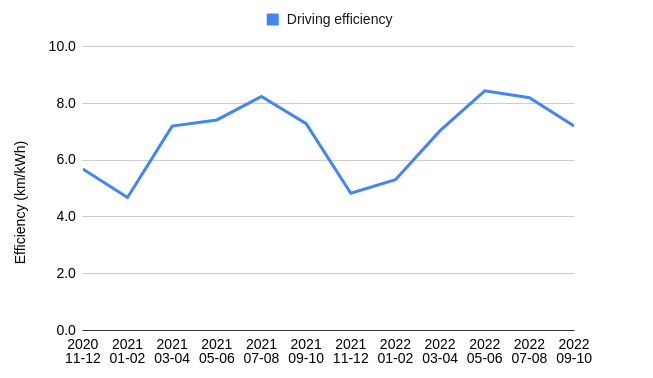 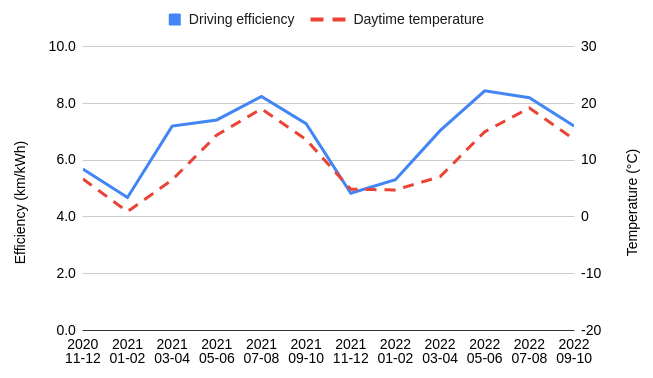 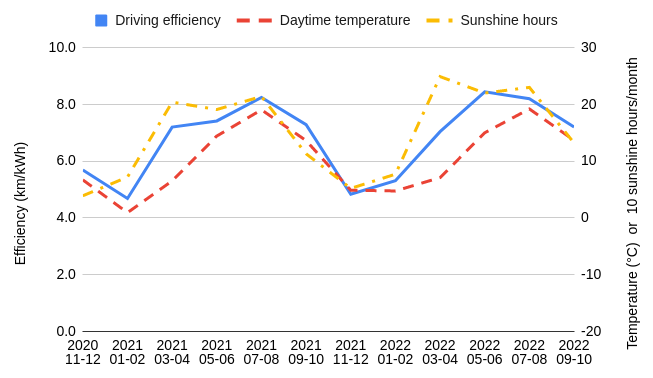 It might be that the sun dries wet roads faster and slightly increases the road and tire temperature compared with the air, improving efficiency. Either way, here’s the same diagram with the efficiency turned into range, from 179 to 323 km: 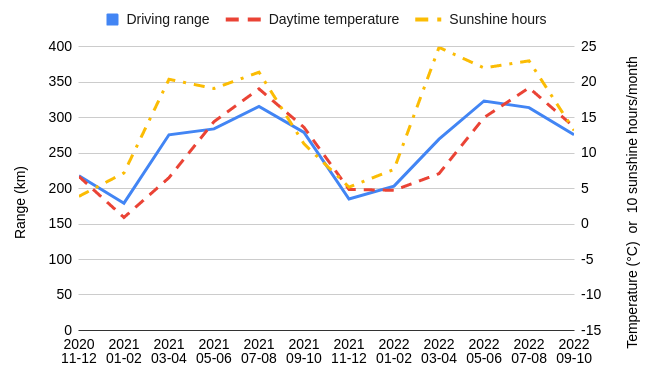 The efficiency at a given time of year is still just an average of different driving styles and speeds. Here’s how speed affects efficiency.

I tested the efficiency of my car at different speeds. On a calm and sunny Sunday at the end of May, I drove a motorway round trip three times at different speeds. I started at 50% state of charge, then drove the 46.6 km loop and charged back up to 50%, then repeated two more times. 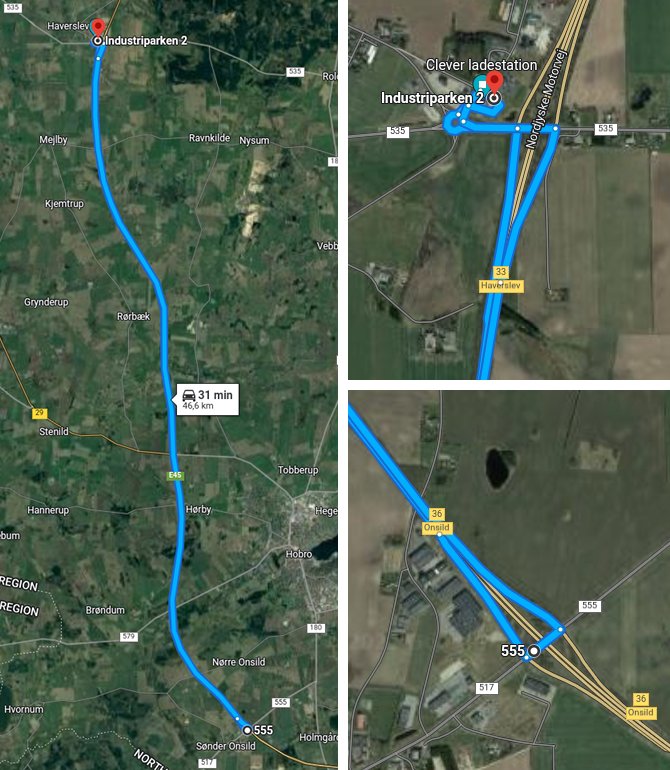 This resulted in the following efficiency values reported by the car, for the full round trip. From the vehicle efficiency I derive the vehicle consumption and the resulting range.

If the trip ends at a destination/home charger, driving faster simply means you’ll get there faster, by spending more energy (and therefore money). However, if the journey is longer and requires charging along the route, driving faster also means waiting more for charging. Here’s the time I spent driving and charging: 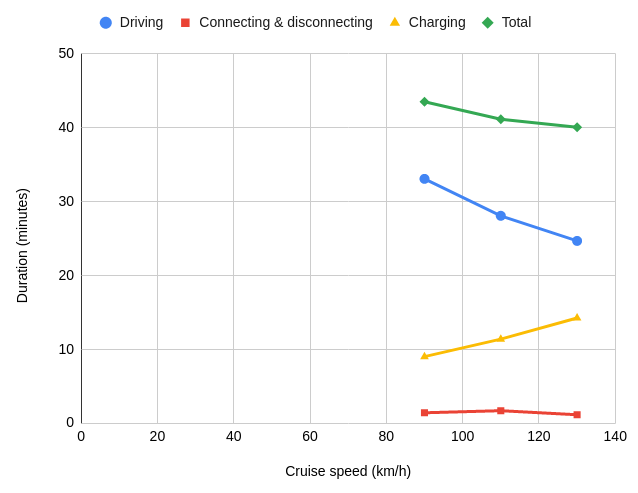 This table shows the resulting average speeds, which are lower than the cruise speeds because of the driving off-motorway, and again lower when including the time to charge the battery back up:

The Ioniq Electric 38 kWh, because of its limited charging speed, is not too fast on long journeys. In Youtuber Bjørn Nyland’s 1000 km challenge series, the Ioniq 38 achieved an average speed around 70 km/h in the winter, similar to veteran EVs Nissan Leaf and Renault Zoe. If you pay a bit more, there are some EVs with a great trade-off between price and long-distance speed around the 90 km/h mark: Hyundai Kona, Kia Niro, VW ID.3, Cupra Born, Tesla Model 3 SR+. Finally, you can get around 100 km/h and up with the newer Ioniqs, Kia EV6, and many models from Tesla and the German automakers.

But as seen in Bjørn’s videos, sustaining a high average speed on a long journey means there’s almost no time to eat or take breaks on the trip. And that’s why even a slower-charging, affordable EV such as the Ioniq Electric can be good enough.