That is a perhaps a difficult question to answer. Another question is: Is E always E? And here, the answer is a clear no, at least if we think of writing primarily as a representation of the spoken language. I will look at the sound of E in the two languages I know the best: Danish and English.

In English, the two most well-known versions are the short and long Es:

These are however not the most common realizations of E. Those are instead the following two, even though you probably don’t give them much thought:

The schwa is the most common vowel sound in English, and every vowel can be pronounced that way if unstressed (about, pencil, eloquent, supply, vinyl). The silent E is also called magic E if its presence in spelling modifies the pronunciation of other vowels. Compare for example slat and slate, grip and gripe. On the other hand, the e in done is truly silent; don and done are pronounced the same. But here are still more ways to pronounce E:

“Envelope” comes from French, but none of the three English pronunciations of its E match the French nasal en ɑ̃. They do however appear in other English words such as end and the UK and US versions of swan, respectively. From French we also have

This is a diphthong, or glide between two vowels, rather than a pure vowel. It is again different from French, where é is simply pronounced e. But the eɪ diphthong also appears in for example the English pronunciation of Santa Fe from Spanish, and original English words such as lane. (Though I always see this diphthong transcribed /eɪ/, I think many dialects pronounce it [ɛɪ], i.e., with the sound ɛ from bed, and face (which is, ironically, transcribed /feɪs/ on Wiktionary).)

There are also letter sequences that have special sounds:

I wrote about R previously, and how it can influence vowels, which is what happens in the two first cases above. I always see suffix -er transcribed as schwa (ə) for non-rhotic accents (typical of the UK), but I suspect some accents pronounce it with a slightly more A-like ɐ, from where we get slang spellings such as playa and gangsta.

So far we have eight pure vowel sounds (ɛ, i, ɪ, ɒ, ɑ, ə, ɜ, ɝ) and three diphthongs (eɪ, ɔɪ, ju). I have not included E’s function in the words awe and eau (as in eau de toilette), and rheumatism, because it could be argued that it is silent. Especially, au (as in coq au vin), is also pronounced [o] (at least in French). The Danish inventory is similarly large:

With the above words being first two genders of it/that/the, then they, see, I, 2x eat, eats, and is, these realizations of E are all part of the core of the language and not due to any loanword; not any recent ones at least. If we add those, we get for example:

The last one is cheating a bit because it is no longer an accepted spelling in Danish, where we instead use the logical “miljø”. But this decision is rather arbitrary. For example, 30 years ago, the Danish language board tried to change, among other things, the spelling of mayonnaise to the more logical majonæse. And people hated it (link in Danish), even though French words like liqueur, portrait, and capitaine were already spelled likør, portræt, and kaptajn at the time!

The Sound of E

I have found the sounds above by looking at and pronouncing many words, and also by looking through lists of vowel sounds, and looking for English and Danish words with those sounds. Though somewhat systematic, I may have missed some sounds of E. But what is interesting is that my list alone spans most of our vowel capabilities! It goes from high and front to low and back. An example of the first is feet/de [i], with the tongue high in the mouth and the sound made near the front. The other end is father/jeg [ɑ] with the tongue low in the mouth and the sound made at the back. 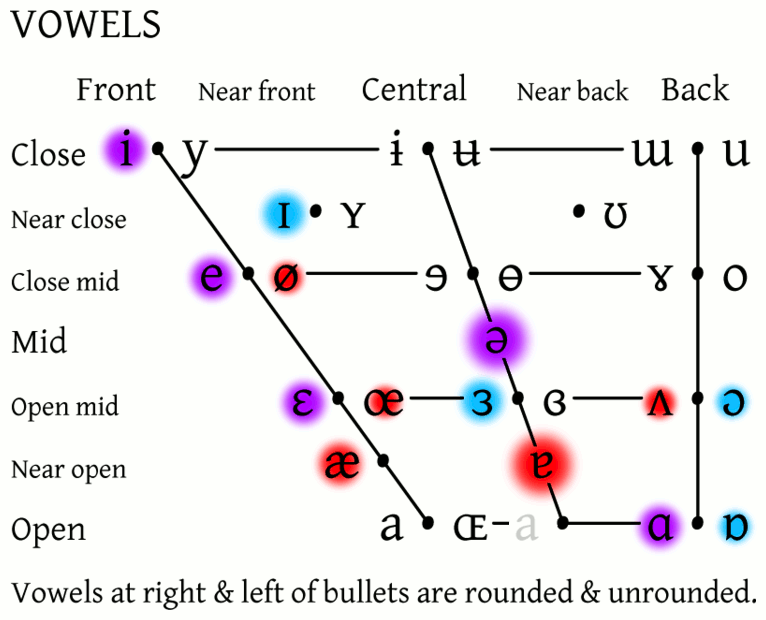 I have illustrated this above. Purple vowels are common to English and Danish, blue vowels are English, and red are Danish. The blob sizes represent my rough guess to how often these sounds are represented by the letter E, graduated in three levels. For the common vowel sounds, e and ɑ are used more often in Danish than in English, while i is used more in English. ɛ is used often in both, and ə even more. For diphthongs, only the first component is shown to keep it simple.

As we can see from the picture, the letter E is perhaps so full of meaning that it is almost meaningless. So we could ask ourselves whether it has to be like this? Or, could have a more regular spelling, so kids could learn to read in months rather than years? This will be a future topic!

E on the Keyboard

In the meantime, E is still the most common letter in many languages. So how easy should it be to type on a computer keyboard? Very easy, preferably.

The ergonomic, three-dimensional Maltron keyboard goes as far as to put the letter E on the strongest finger: the thumb! Most other “normal” layouts that improve on QWERTY put E on the home row, where you rest your hands when touch typing. A good example is the Colemak keyboard layout which I wrote about recently.