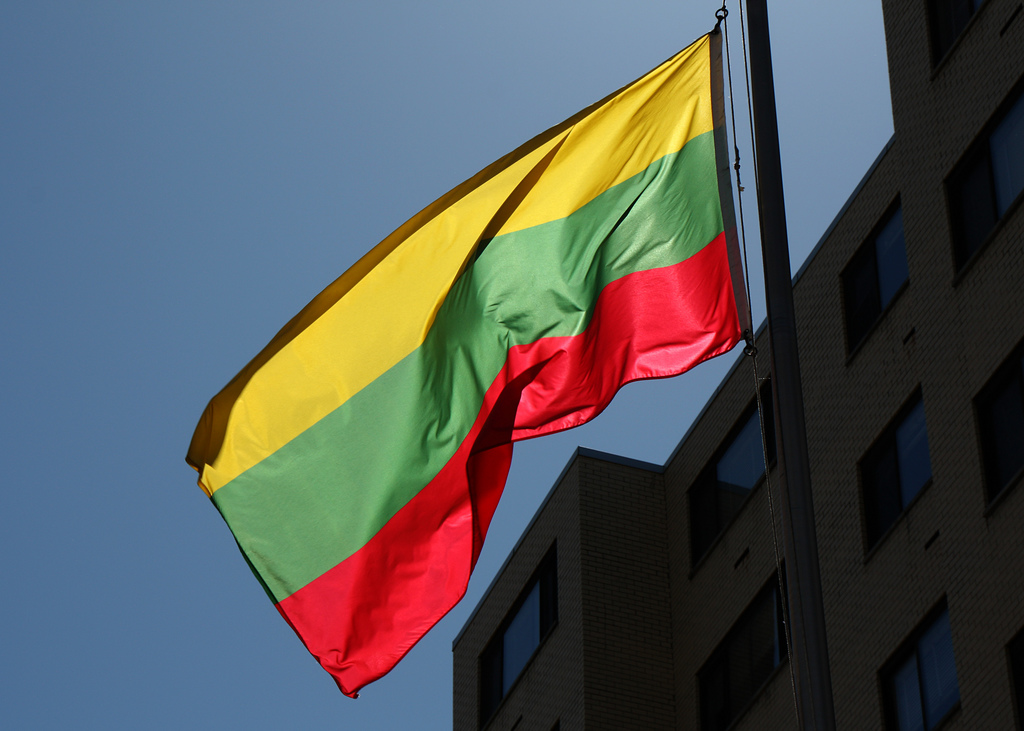 Lithuanian is based on the Latin alphabet, but adds and removes some letters. My favorites are the three extra consonants — Č, Š, and Ž — and their logic:

I think it is interesting to have separate letters for these sounds. They are compact and more predictable than in English where for example ‘ch’ can be pronounced as in “cherry” (the standard č-sound), “stomach” (k-sound), “machine” (š-sound), or even “yacht” (no sound).

That is not to say that they are 100% predictable. Coca-Cola, for example, is still written Coca-Cola (even though I do enjoy pronouncing it “tsotsa-tsola” for fun). But some imported words do change spelling. Can you guess what “pica” is? (I’d love to have some.)

All in all, the spelling is fairly systematic, but regarding stress/accent, it’s no better than English or Danish. From my Lithuanian book:

Rules concerning word stress are really quite complicated in Lithuanian, unfortunately, so it is best if you try to imitate both pronunciation and stress [when listening].

This is opposed to a language such as Spanish, where accents mark exceptions. Most unmarked words are stressed on the penultimate (next-to-last) syllable, so for example if corazón was written without the accent, it should be pronounced corazon rather than corazon.

But perhaps technology is changing this. Whereas accents and other diacritics are easy to add in handwriting, it takes more time on computers and mobile phones, enough that they are often skipped in casual writing, reducing the logic of the written language, in Spanish as well as in Lithuanian. But that is all part of the evolution of languages.

In English, words’ roles in sentences (subject, object, etc.) are marked with word order and prepositions (to, in, on, etc.). But there is another way of marking them, namely cases. Lithuanian has seven:

Each noun has these seven forms, for example alus (beer), alaus (of beer, beer’s), alui (for beer), alų (beer as object), alumi (with beer), aluje (in beer), alau (O, beer!). And then it has another seven forms in plural. Here follows some examples of case use that I like.

The first is about Vilnius, the capital of Lithuania, and the locative case:

When I first decoded this sentence I was stoked. It is such a different way of representing information. Another example I saw in an electrician’s advert:

Last Christmas I got a present with a label with a single word on it: Erikui. It is the dative case of my name so it means “for Erik”. But this does requires a name with a special ending to fit into the declension paradigms. My Lithuanian name is Erikas. Some possible endings are -as, -is, -us (masculine), and -a and -ė (feminine).

The vocative (addressing) case is especially relevant for names. For example, my girlfriend’s dad’s name is Tomas. But to get someone’s attention, you use the vocative: Tomai. This was weird to me at first, but on the other hand, if you hear your name spoken, you can tell whether people are talking to you or about you, which is nifty. Here are some examples of the instrumental case:

As you can see in the second example, prepositions are still used. In this case an explicit “with” to say “with you as a companion” rather than “with you as a means”. Languages with even more cases such as Finnish and Estonian express relationships like “to” and “from” as cases, while they are prepositions in Lithuanian. In Lithuanian, prepositions can also be overloaded. For example po + instrumental means “under” while po + genitive means “after”.

Finally, a cute example of the locative:

I am fascinated with this case system, but it also takes a considerable amount of time to build a vocabulary. One thing that is especially hard is counting. As you have just seen, numbers can be used in the locative. But typically, the case of the number just matches what it counts. “Vienas taškas, penki taškai” means “one point, five points” in the nominative case. But as an object in the sentence, it is different:

Then add to that that numbers also decline for gender, and you have not one word meaning “two”, but 14 (7 cases * 2 genders). Then you can add the ordinal (“second”), which in Lithuanian has 7 cases * 2 genders * 2 numbers (singular/plural) * 2 forms (pronominal/non-pronominal) + a neuter form = 57 forms.

On top of the two main types of numbers — cardinal/quantitative (one, two, etc.) and ordinal (first, second, etc.) — Lithuanian has two more. The first is a “super-plural” for counting groups and plurals-only, which, in English, are words like scissors, clothes and electronics. The second is a collective type for the size of groups: Where English speakers can talk about a pair, a dozen, a hundred, or a million of x, Lithuanians can equally easily talk about groups of any size.

I am told by my better half that the collective numbers are not common in everyday use, and that probably holds for some of the other grammatical features I come across as well. But while some people learn about the roots of Indo-European languages from Latin or Ancient Greek, I do it from Lithuanian. Plus I learn to speak my girlfriend’s language at the same time. And Lithuanian is great for creating affectionate words! As written by Élisée Reclus in Nouvelle géographie universelle:

Of all European languages, the Lithuanian has the greatest number of affectionate and diminutive terms, more than the Spanish or Italian, even more than Russian, and they can be multiplied almost indefinitely by adding them to verbs and adverbs as well as adjectives and nouns. […]

If the value of a nation in the total sum humanity were to be measured by the beauty of its language, the Lithuanian ought to have the first place among the nations of Europe.

Update 2018-01-01: Fixed attribution of the last quote (thanks, Robertas) and another source.